Footwhistle Cave (also known to local maori as Te Anaroa Cave) was officially opened on 1st July 1992 after a lot of hard work and development. This was a dream come true for founding cousins JoJo Davis and Richard Carnachan.

The Footwhistle Cave lay’s beneath pristine native forest that has been vested into Queen Elizabeth II Trust. Vesting this area in trust places a covenant over the replanted native area, so it can never be cleared. The native forest that surrounds the streams, entering the cave was originally cleared as farmland, but has been replanting back to the original native, this was started 26 years ago. The native forest not only help’s with erosion control but also provides a rich habitat for insects. The insects breed in the stream banks and pools, their larva are washed into the cave, they naturally hatch in the cave and provide a food source for the Glow-worms. The Glow-worm populations increase as their food increases so the planting and protection of the streams outside the cave plays a crucial role in sustaining our amazing Glow-worm displays. This tranquil native forest is also home to abundant native bird life.

Tangata Whenua / People of the Land

Kyle Barnes and Trieste Henry are the Kaitiaki (guardians) or owners of the land directly above the Footwhistle cave. Both call this area home and have been a part of this land since their childhood. Both are actively involved and value being part of a real New Zealand small community.

When you visit Footwhistle you will immediately notice the space and time. Small groups and limited numbers offer’s an old school warmth and kindness you would expect when visiting Whanau/ family. We invite you to come with us, journey underground and observe the Wairau/soul of our land.

Footwhistle has been developed by Mother Nature over millions of years. It’s humbling to be the temporary guardian of such a precious resource. Everything we do from our solar powered lights, our replanting of native tree’s to our small group sizes, allows us, not only to operate in a sustainable way, but to preserve this resource for future generations to marvel at.

The full Te Anaroa cave system is one of the largest in Waitomo and stretches underneath 3 properties.

Trieste’s step father JoJo Davis resided on the neighbouring property and it is his family land. JoJo had a vision to open this cave to the public as an adventure tour, along with JoJo, Trieste’s brothers, Kyle and his father, all played a part in opening this cave in 1992 as a Blackwater Rafting venture. This adventure tour operated through much of the extensive cave system until it was closed in 2018. 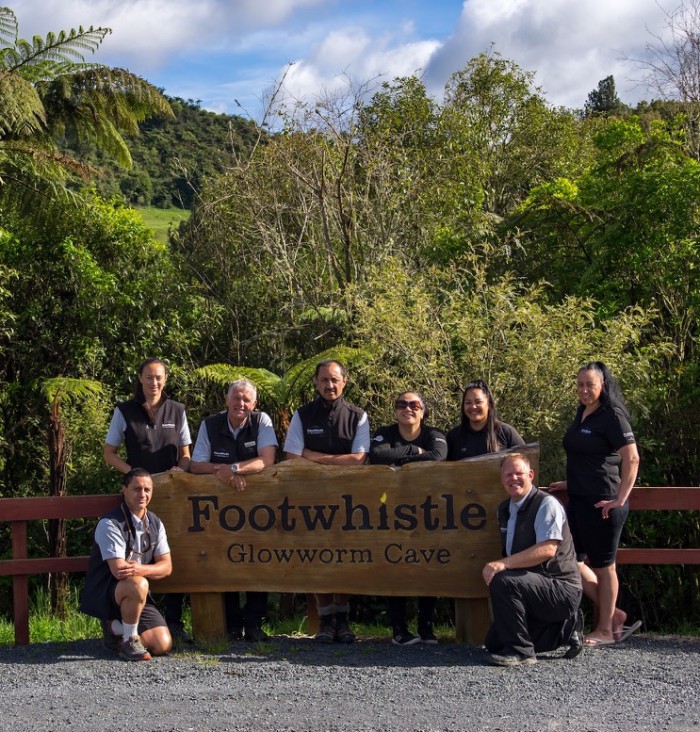